Escola Nova 21 is an alliance of schools and other public and civil society institutions for an advanced education system. It responds to UNESCO’s call for the participation of all sectors in an inclusive process to improve education. Escola Nova 21 was created in January 2016 through an agreement between the UNESCO Center of Catalonia, the Jaume Bofill Foundation and the Open University of Catalonia, which were then joined by the “la Caixa” Foundation and the Provincial Government of Barcelona (“Diputació de Barcelona”).

At its inception, the program signed an agreement of collaboration with the Government of Catalonia’s Department of Education, with which it works to jointly plan its actions in order to ensure that they bolster the efforts of public education administrations.  In the city of Barcelona, ​​Escola Nova 21’s approach is articulated through Networks for Change (“Xarxes per al Canvi”), an initiative led by the Barcelona Education Consortium (a government entity that combines the efforts of the Barcelona City Council and the Government of Catalonia).

Escola Nova 21 proposes a transformation of the Catalan educational system that brings it fully up-to-date, embracing a purpose aimed at developing competencies for life, in our historical context, and employing practices based on existing knowledge of how people learn.

The ultimate goal is that all children, regardless of their context or conditions, in all schools, be able to enjoy empowering and relevant learning experiences that allow them to develop their life projects with dignity, meaning, and well-being.

The common horizon of change for all schools is grounded in a framework that supports many possible educational models and projects that have in common these four interconnected and interdependent axes: 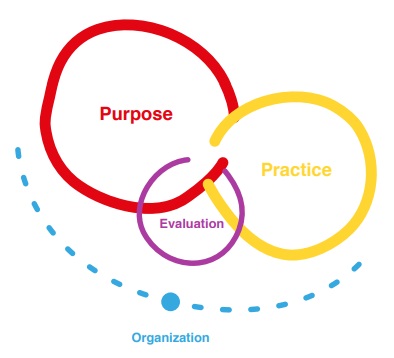 Escola Nova 21’s goal is to catalyze support for educational change through a three-year program designed to generate no-return momentum for the transformation of the entire Catalan education system. It will do so through four principal actions: Supporting and consolidating already existing projects for transformation in schools and in the system; Engaging in collaborative work for educational change; Building alliances with education administrations and local governments in order to develop co-responsibility for change; And generating and experimenting with protocols for system-wide change.

First, Escola Nova 21 highlights and celebrates a diverse group of Catalan schools that are already focused on developing competencies for life, and that have adopted practices grounded in how people learn. The program’s 25 founding schools are a wonderful example of these efforts, and the program works to ensure that their efforts are consolidated, that they are used as points of reference, and that the educational system as a whole moves in a similar direction. This requires that regulation, and decisions made by the relevant public administrations, support a shared vision of that school as autonomous, inclusive, and competency-based and holistic in its approach to learning.

Second, Escola Nova 21 supports broad collaborative action to update the educational system through the work of hundreds of volunteer schools, in conjunction with the partnership of local governments and entities. In 2016, an open call identified 481 centers willing to join this program and, thanks to an agreement with several local and educational administrations, more than sixty territorial networks of between 4-16 schools each have been established. These networks use collaborative learning practices, and the “Spirals of Inquiry” methodology to advance their processes of change. The interaction of thousands of teachers involved in these schools is the most horizontal and sustainable way we have of supporting educational transformation.

Third, Escola Nova 21 collaborates extensively with educational administrations, which is of fundamental importance if change to be generalized in the education system. In this regard, Escola Nova 21 established an agreement with the Barcelona Education Consortium (“Consorci d’Educació de Barcelona”) that integrated Escola Nova 21 networks into the Networks for Change (“Xarxes per al Canvi”) program, led by the Consortium, which moves forward the commitment to progressively generalize the process of change within all schools in the city of Barcelona. The program also works with the educational administration and local authorities to extend this agreement to the whole of the Catalan educational system.

Finally, Escola Nova 21 seeks to join forces and share knowledge in order to generate procedures that allow a systematic update of all Catalan schools. It does so thanks to the commitment and generosity of 30 schools that have voluntarily agreed to form part of a representative sample constructed on the basis of percentage of geographic distribution, socioeconomic profile, degree of complexity, school level (primary / secondary), and other characteristics (rural schools, large schools, public or privately-managed / publicly-funded schools) of the current system. The objective is for the training procedures and actions that are generated through this 3-year interaction be used to generalize school transformation once the program has ended.

The Escola Nova 21 program lasts for 3 years (2016-2019), during which it seeks to catalyze commitment for change, generate a high level of citizen and social involvement in the challenge of updating the education system, and facilitate diverse agents within the educations system, including the education administration, as progressively coordinated agents for systemic change. The impact of the program, therefore, is not limited to its three years, but rather uses these 3 years as the basis for a lasting and integral transformation.